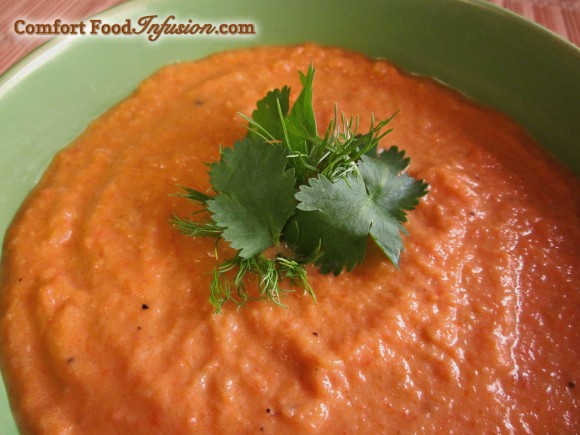 It’s cold outside. Well, not really. It’s chilly outside. No…. It’s not truly chilly either.  I sure wish it were though.  I am feeling cheated out of a winter which didn’t bring much cold or rainy weather.  There are a bunch of ‘cold weather’ foods that did not get prepared this last winter, simply because the temperature outside did not warrant them.  So, I’ve been watching the forecast and waiting for the rain to come (if it does not, this will certainly end up being a drought year).  The clouds keep creeping away, but I will not let there be a drought in my comforting, cold weather foods.  Today, I made a soul warming soup.  Don’t wait for the ‘right’ day to make this recipe.  It is soothing and delicious all year long.

This version is vegan (using a vegan milk substitute of your choice).  Of course, it can be made with dairy milk, cream, half and half, or with no ‘milk’ whatsoever.  Make sure you increase the amount of broth if you omit the ‘milk’. I added pictures of the preparation. Scroll down to view the recipe.

After roasting, vegetables are
brown around the edges.↓ 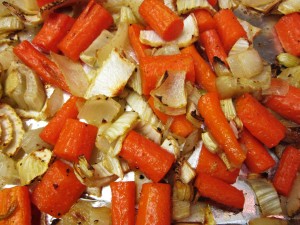 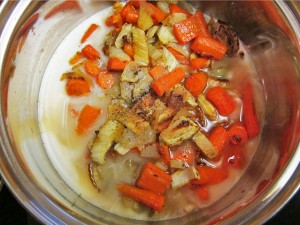 After 15 minutes of simmering, blend with a submersible blender (or pour carefully into a standard blender).↓ 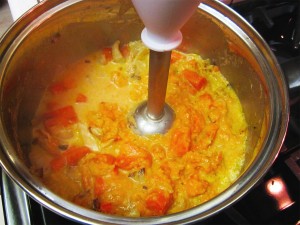 Blend until you reach desired consistency. I like very small chunks remaining.  Add more broth to thin the soup, if desired.↓ 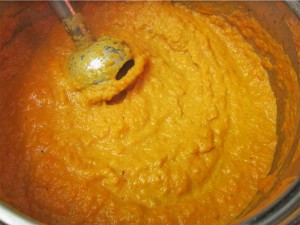 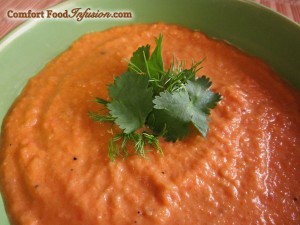 Tips:
This saves well, and reheats perfectly. Make a large batch and freeze the leftovers.