It’s hot. Have I mentioned that? This is normal for Northern California, but I never  truly adjust to it. I have lived here all my life, and you would think that the heat would be something I would tolerate, simply because this is normal. Wrong! The heat seems to become less tolerable with each passing year, and I don’t think the climate has really changed much. One way I beat the heat, is by making salads often. Another food that I enjoy in warm weather (any time of year, actually) is Japanese food. Have you ever noticed that there are not too many heat-up-the-house-with-the-oven dishes found in Japanese cuisine? They know how to ‘cook’ for hot weather, so I take many tips from them. Makes it so much easier to follow their diet when their food is absolutely delicious to boot. This cucumber salad, or Sunomono in Japanese, is one of the great recipes I make when I want something cool. This simple salad works great as a side dish or salad with any meal, not just a Japanese one. 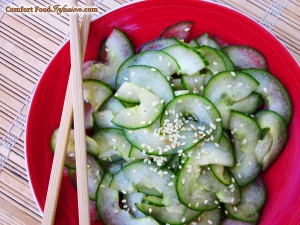 *Notes:
I don't peel English cucumbers, but I would suggest peeling traditional cucumbers.