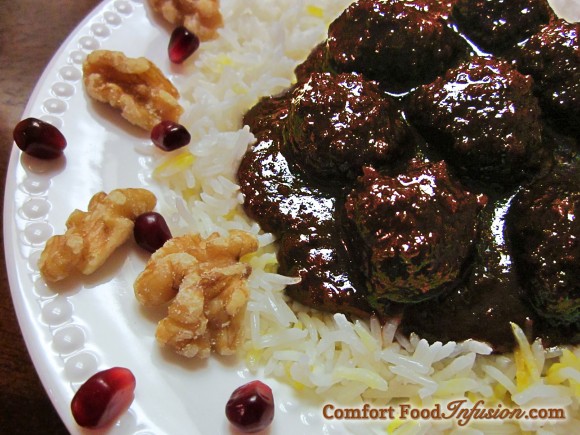 Khoresht Fesenjan (Pomegranate Stew) is a classic Persian comfort food. It is commonly served in the winter, because that is when pomegranates are in season, and it is such a rich, soul warming meal. Even though winter is far behind us, I am trying to get all of our favorite cool weather foods made and out of my system, before the summer’s stifling heat prevents me from wanting to turn a flame on in the house. This dish is probably more commonly made with chicken, but our family prefers it with beef meatballs. This recipe uses a soup-like base of ground onion and walnuts, sugar, and pomegranate molasses, which can be found in Mediterranean or Iranian markets. The molasses is soooo sour, which is why it is necessary to add such a large amount of sugar. I have only ever tried brands that produce a sour molasses. It is possible to come across one that is not so sour, therefore you would reduce the sugar. I taste the stew as it is simmering and add sugar to my liking. You may want to leave it sour, or sweeten it quite a bit. Up to you.

As I was beginning the preparation for this meal, I was wondering how I could make it meat-less. I could simply just make a soup containing ground onion and walnuts, and pomegranate molasses. That would taste perfectly fine. Then it occurred to me that I could also make this with my nut-burger recipe. So, I made a vegan version of this as well. Images of prep are below. Scroll down for recipe.↓ 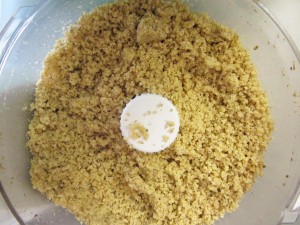 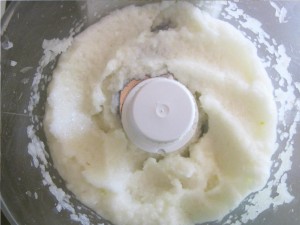 Combine ground beef, 1/2 of the ground onion, and spices and roll into 1 1/2 inch balls. Brown in a large fry pan.↓ 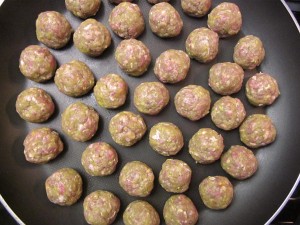 *Meatball flipping tip* Gently pick up meatball with tongs, place one meatball on the top edge of it’s neighbor, and let it roll down
and onto its flip side.↓ 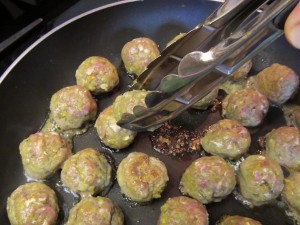 Once all meatballs are browned on all sides, transfer to a large pot. Also add to pot, ground walnuts and onion. (If making vegan, do not add this to meatballs, simply prepare as a soup).↓ 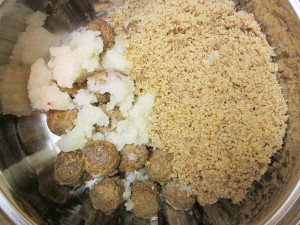 Add three cups water to pot, stir gently, heat to boiling, lower temperature, and simmer for about one hour (stirring occasionally), with lid cracked open
to allow steam out.↓ 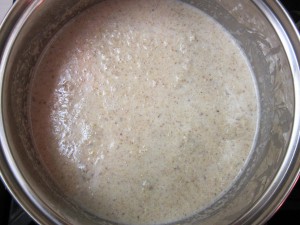 After simmering for one hour, pour in pomegranate molasses and sugar. Simmer for one more hour (stirring occasionally). The stew will thicken and darken the longer it cooks. It will thicken even more
when removed from heat.↓ 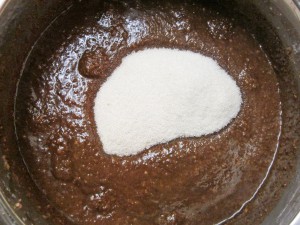 Here is the nut-burger version: Omit all the seasonings listed in this recipe and replace with 1/8 tsp. cinnamon, 1/4 tsp. turmeric, and a pinch of saffron. Roll into balls. Heat in a pan with olive oil, until browned on all sides. Add nutmeat-balls to walnut-onion-pomegranate soup-mixture, just before serving. (If the nutmeat-balls are added too soon, they will break down into the stew.)↓ 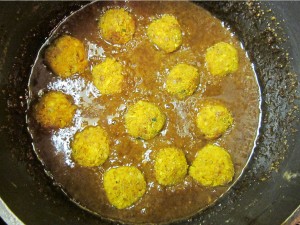 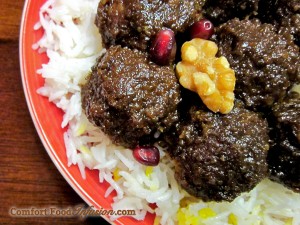 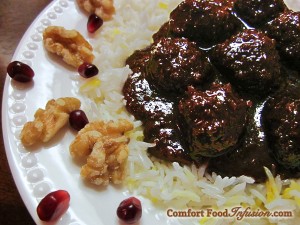 *Pomegranate molasses can be found at Mediterranean or Iranian markets. It is usually quite sour, but sometimes on the sweet side. Adjust the amount of sugar you use to your liking.
**While cooking the meatballs, don't be alarmed by the temporary green color. This is caused by the turmeric, and the green will disappear once fully cooked. Adapted from from my dear Mother-in-law